The latest bunch of figures for the Bactrian Greeks included some older sculpts from Essex Miniatures and much newer Victrix figures. The Essex range of specifically Bactrian Greek Successors must be over 20 years old but the style and size fits in fine with newer mid-sized figures such as Foundry, Warlord or Gripping Beast. I am not a big fan of the Essex horses but I had a stash of old mounts from Corvus/Sussex Miniatures that suit the figures fine despite the saddle cloth being moulded onto both the rider and the horse. 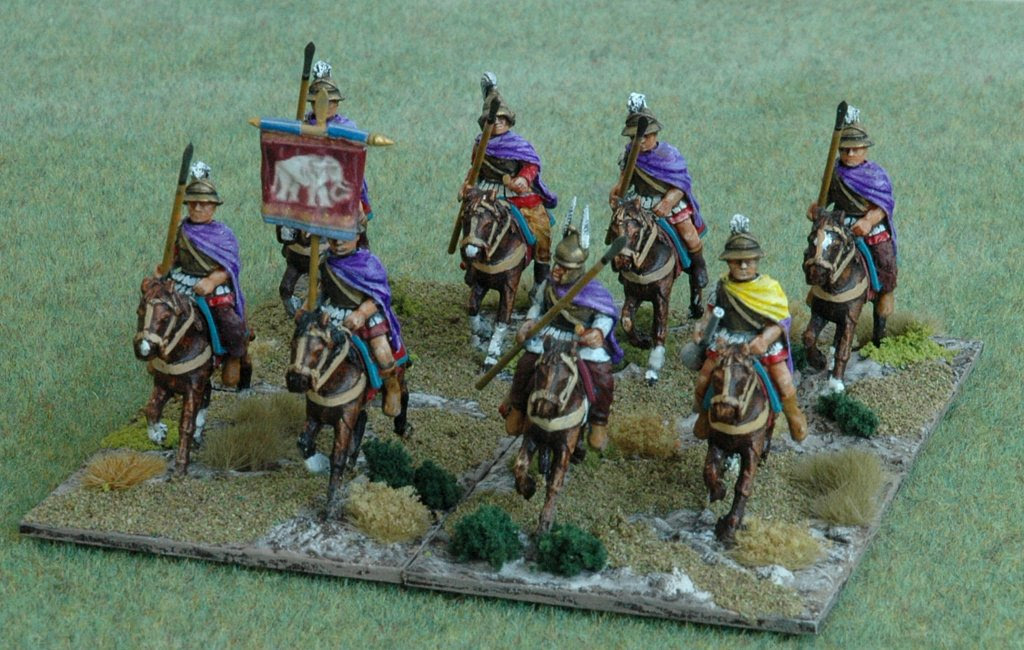 The solitary Guard cavalry figure in the range would be the basis of my Agema unit. To give the unit a little variety, (Guards are allowed to be a bit on the uniform side,)  I mixed in a couple of the Persian horseman with head swaps. The Persian cavalry figure is similarly armoured but without a helmet, and wearing trousers. The head swaps (Victrix hoplite head and Carthaginian officer head) dealt with the lack of appropriate headgear and I added trousers to a couple of  the Guard figures to further "easternise" them. I knocked together a standard from a steel pin and some plastic spear parts. the banner came from a set of LBMS shield transfers. A plastic trumpet gave another cavalryman a slightly different look.

I am quite pleased with these, they look purposeful if not as dangerous as my three-to-a-base, Companion type, lance only cavalry. I expect them to be leading devastating cavalry attacks or biding their time as the quality reserve of the army. 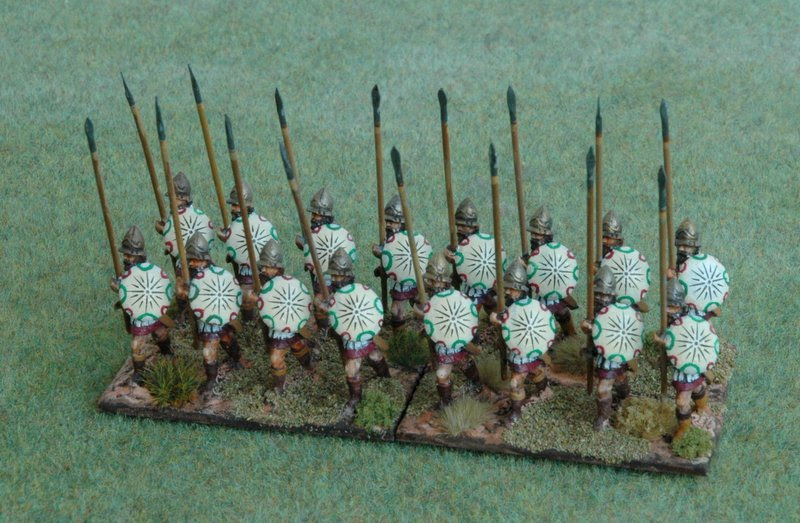 The next unit was also from the Essex 25mm range. This was the solitary pikeman model and I bought a unit of 16.  based pretty much just on the figure's excellent late Hellenistic headgear, a very elegant pointed Boeotian variant. These figures look like they will complement my exisiting Corvus / Sussex Minaitures pikeblock and brings them up to a handy 64 figures (4 units or 2 small taxeis of pikes.) Although the pike phalanx is very formidable, I am not going to field more than these 4 units for one main reason. There just doesn't seem to be  much in the way of evidence for them being the main element of the army (compared to other Successors.) This could be due to the huge distance away from the traditional breeding grounds of the Greek and Macedonian heavy infantry and also due to rebellions by early settlers that must have thinned out the available manpower. 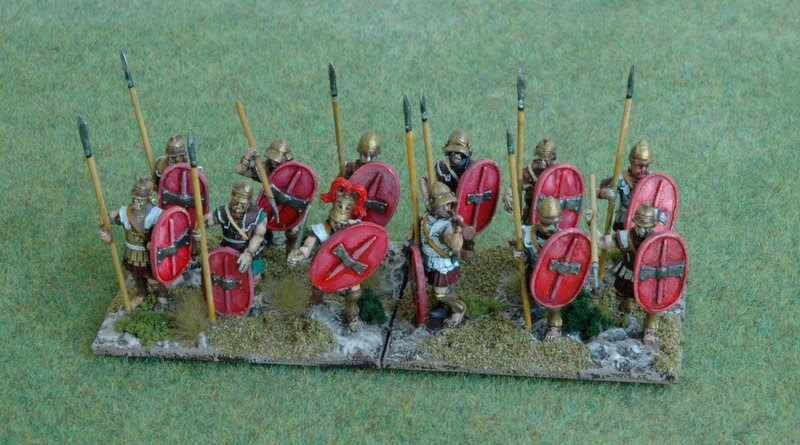 There are some representations of soldiers carrying large oval shields, so probably Theurophoroi (after the oval theuros) or Thorakites (the armoured version of these troops.) It would make perfect sense if this type were more common than usual if pikemen were hard to come by. The theurophoroi were the standard Hellenistic mercenary type and there has been much debate about how they were equipped and how they fought in the battle line. My own theory is that  full time mercenaries would be trained to fight in a variety of styles and equipped appropriately.  Whilst the majority of Theurophoroi representations show no armour, this does not necessarily mean they were confined to fighting as part of the skirmish line. With a large heavy shield the expensive provision of armour could be avoided even for soldiers expected to fight against the enemy in the main line of battle. 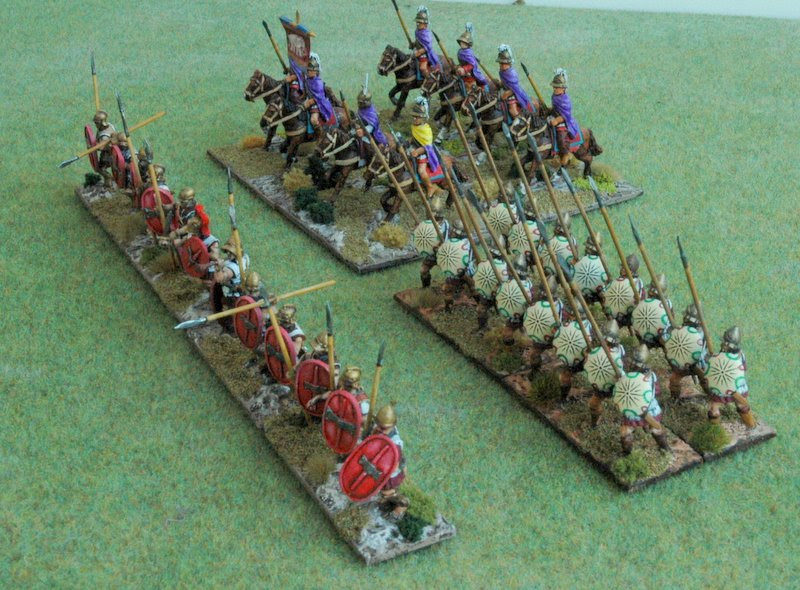 These mercenaries would be expected to take on roles such as garrisons, supply escorts, raids and border guards where cumbersome armour might not be much advantage anyway. The armoured Thorakites seem to have been much the minority of this type and perhaps a response to encountering Roman heavy infantry. Where funds allowed armouring the mercenary element of an army would seem to offer a tactical advantage and Bactria does seem to have been a very wealthy region under the rule of its Greco-Macedonian kings. 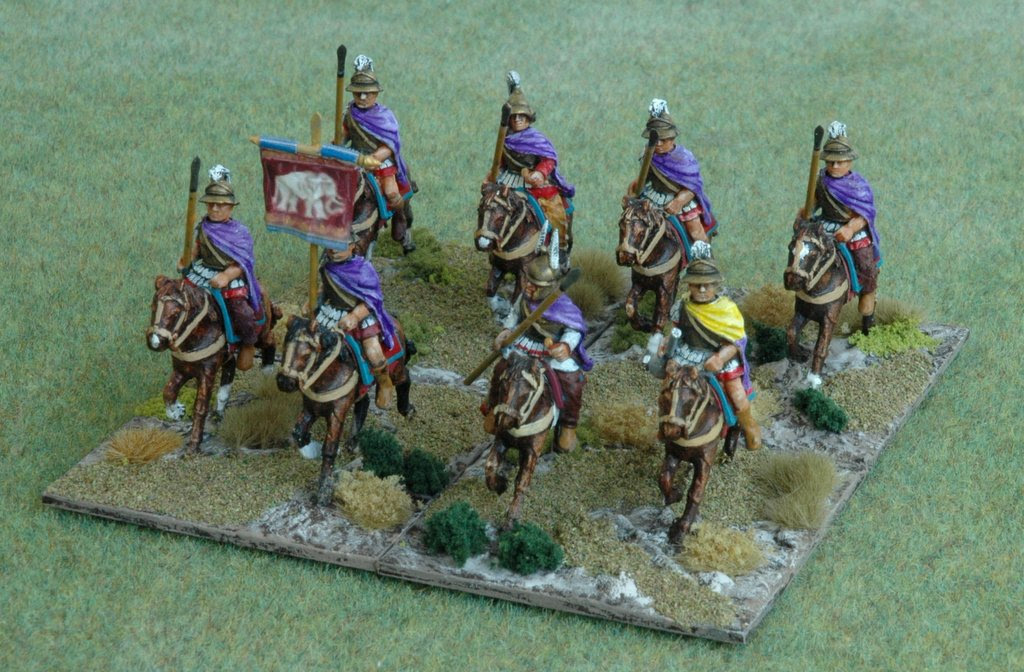 Almost half of my heavy infantry will be theurophoroi (3 units initially) and the first 2 units completed are armoured in linen/leather spolas body armour. Whilst there are Thorakites available from several manufacturers in mail armour, mine are converted from Victrix Theban hoplites (great castings) with the addition of shields from Crusader Miniatures. Agema Miniatures now also do a nice pack of theuros which is a little smaller. For this second unit of theurophoroi I used about 50/50 heads from the Victrix hoplite box and heads from a Carthaginian pack by Agema Miniatures. The Agema heads look very close to a style seen on a Parthian statue, so a near neighbour of the Bactrians and a not unlikely to be used by them. 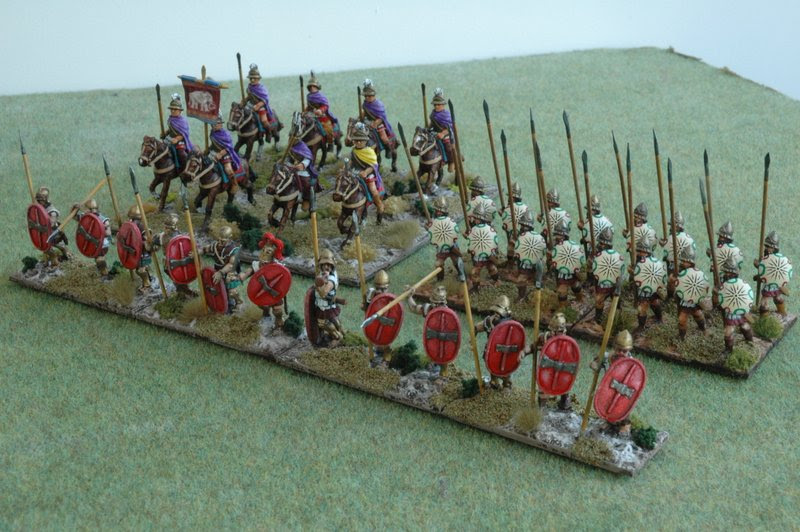 Next up: some generals, a unit of light cavalry and the inevitable elephants. Should be ready then to take on the Indian hordes or (more tentatively) a Selucid  army. 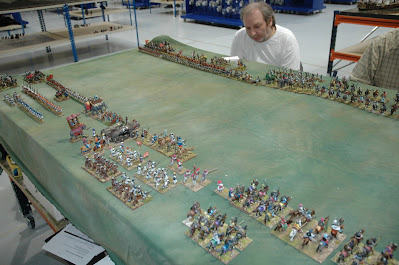