I don't really do rebasing; it's enough faff the first time round... These days new sets of rules are less obsessive about the exact frontage of a wargame figure unit or the number of figure per square inch. A rare exception is these Corvus Greek cavalry. I decided to reduce the figures in the Thessalian unit down to a Piquet standard 8 figures (for cavalry.) Part of the decision was that I knew I had spare   figures that would go with the discarded four to make up a whole new unit (and half already painted!) 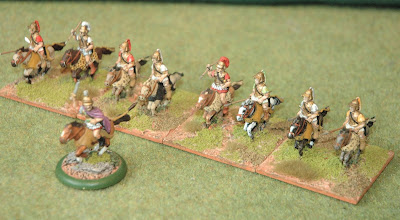 I had 2 of the Corvus cavalry and 2 Newline figures that fitted in quite nicely on Corvus horses. The Greeks were a bit slower to adopt shields and for the most part preferred throwing javelins from a distance to charging in with lances. They were usually a small minority in a Greek army, so probably a good survival tactic!

The General on the fancy base highlights one of the problems that some older figure ranges could suffer from. His horse was one of a number that snapped off at the ankles due to the metal being a bit soft. The tail also became a casualty where there was a slight moulding fault at the narrowest part. I must have been in a frugal phase, as I took the time to pin the horse through a thick resin base I had picked up somewhere. I also rebuilt the horse's tail and the saddlecloth lion's tail using wire and milliput. 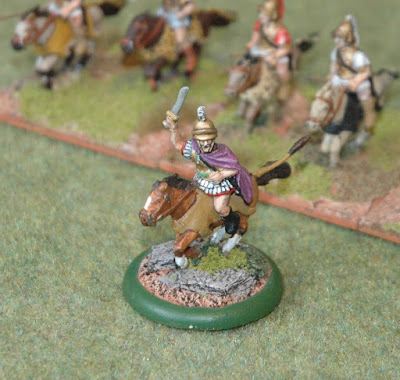 I was very happy  with the result, at the limits of my modelling ability at the time. He stands out nicely on his raised base too. 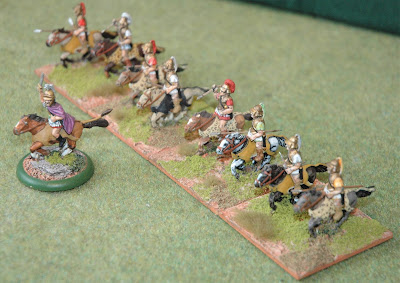 Greek heavy cavlary are quite useful as mercenaries in a Successor army. Maybe only in a second line role but fairly competant and reliable.

When I was first deciding which Successor army I wanted to field, the army list of choice was the WRG 6th Edition lists. These were the ones with amusing cartoons on the front (Book 1 had a generic barbarian who has bitten off the end of a discombobulated hoplite's spear.) 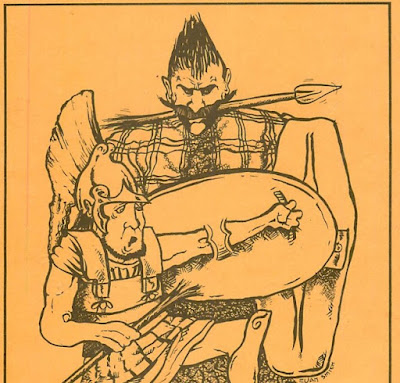 There were a large number of Macedonian Successor lists to choose from. They all were formed around a core of pikemen plus theurophoroi/peltasts and some cavalry lancers. To these are added a huge variety of more or less exotic units, from various light infantry and barbarian types, to stomping great elephants.
The army of Pyrrhus had a decent quantity of good quality cavalry available. Most of it armoured and best of it fighting in wedge formation with long lances (much like Alexander the Great's Companian Cavalry.) I bought four units of cavalry from , what was then, the new range from Corvus Miniatures. These were nice sculpts and direct representations of the illustrations from Duncan Head's "Armies of the Macedonian and Punic Wars." This tome was pretty much the cutting edge of military history for the period, at this time. I bought 4 or 5 units worth of miniatures which was a sizable chunk of a years hobby budget for a schoolboy. 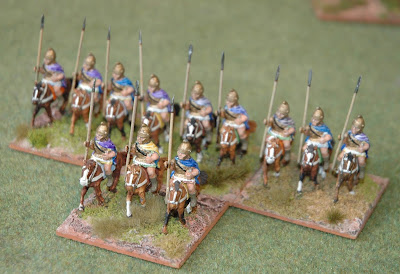 The Pyrrhic army can upgrade all its cavalry to being shielded (from their contact with Italian Tarentine cavalry.) The Thessalian contingent of cavalry were one of the best in the army so I invested in the upgrade for them. 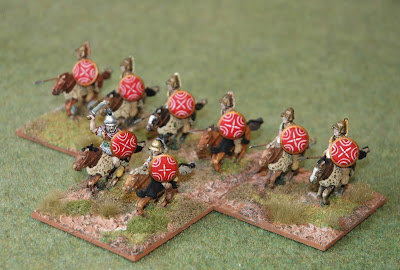 This unit has been a solid performer over the years roughing up Carthaginians and Romans on multiple occasions. Fighting later cavalry such as Sassanids they have not been so successful, but then there are always pikeblocks to hide behind!

The second unit on deck is the frequent companion of the Thracians, a unit of Greek peltasts. They tend to carry out a similar function; clearing skirmishers and occupying rough ground as their speciality. If really neccessary getting involved in the main battle line, protecting the flanks of the phalanx for example. It rarely end well! 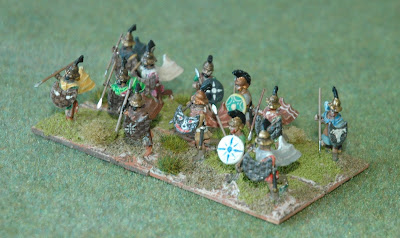 These are all Hinchliffe figures, probably a bring and buy purchase. They are actually a mixture of peltasts (with the cloaks) and Iphicrateam "hoplites" (with the round shield.) 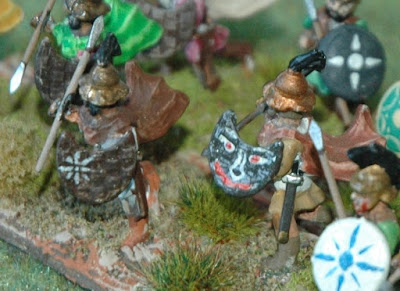 All I did with this unit was tart up the baseswith some additional flock and a few tufts. I decided not to mess around with the paintjob or tackle the worse of the mould lines!

This has been a long time coming.  I do have lists (even a spreadsheet!) of my painted ancient figures but bringing out all the units into the light, doing whatever running repairs are required and taking pictures of them all is a task that has been put off for a looong time. Part of the impetus for doing this now is the rather sad acquisition of the figure collection of my friend Les, when he died suddenly earlier this year. As a part of the decision about what to use, what to store and what to get rid of, I really need to get a better grip on what I already have (painted and unpainted...)

Decided to start with the oldest as they probably need most love...

This is my unit of 12 generic tribal hillmen / Thracians. Back in the days of WRG they were Irregualr LMI (oh how we agonised over regular or irregular status!) The miniatures are mainly a mixture of Essex and Corvus Thracians and peltasts. In the mid eighties these were about the best ranges available for Successor armies. The remainder are Hinchliffe and a solitary QT multipart figure. I have no idea what the chap with the red plume is supposed to be. Possibly a Carthaginian? He has generally Hellenistic armour and shield but the helmet looks wrong. Anyway I swapped his sword for a Thracian rhomphaia, to become a well equipped tribal leader.

This unit didn't need much urgent attention. The paint job (using the first set of Citadel acrylics  - which dates them) is still passable. A few touchups to crests and weapons required. I also repainted the bases as they had lost a lot of flock leaving a fair bit of gloss green showing. 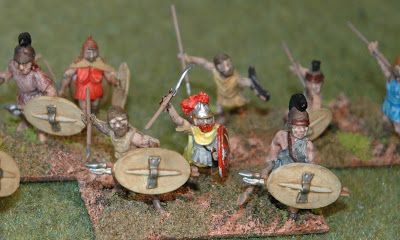 A useful unit that can be included in a lot of different armies as Thracian or similar poorly equipped mercenaries. 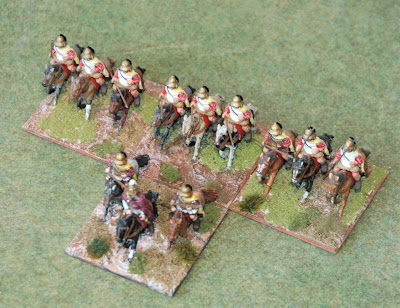